Why Residential Fire Sprinklers Systems are Important and How They Can Save Lives? - americanfireinc

Even though the number of fire accidents and fatalities decreased in our country in the recent past,  the scope of catastrophe caused by these deadly fires is worst of late.  For instance, the Philadelphia Apartment Fire (Jan 05, 2022) and Bronx Residential Fire (Jan 10, 2022) have killed more than a dozen lives.  Bronx Fire accident was considered as one among the deadliest in the past three decades in New York, according to the officials.

The lack of compliance with local regulations has been considered as the prime reason behind such unforeseen incidents.  There were a few notable associated happenings in the Bronx Fire incident.  The malfunctioning of self-closing doors resulted in the smoke spreading to all floors very fast. The false alarm systems and absence of fire sprinkler systems compounded the after-effects.  During any fire blaze, it is not the fire that kills people but the smoke that spreads faster than fire.  In the case of the Philadelphia fire, there were no smoke detectors which resulted in 12 fatalities.  The U.S. Rep. Ritchie Torres rightly commented that the absence of fire sprinkler systems in many of the old residential buildings would make them more susceptible to devastating fires.  Most of these buildings were built in the early 70s when fire sprinklers were not mandatory. 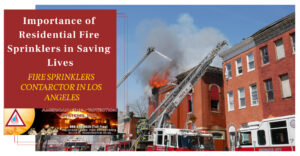 This raises many questions on proper inspection of Fire Protection Systems for older and aging High Rise Buildings.  In fact, NFPA (National Fire Protection Association) mandates inspections of fire sprinkler systems every five years for proper functioning.  The NFPA says “the best way to reduce loss of life and property from home fires is by installing fire sprinklers, noting that they “control 97 percent of the fires in which they operate.’’ But it is sad to state that not many buildings have fire sprinkler systems or follow such inspections and maintenance.  This is evident with the number of causalities increasing while such fire accidents occur.  Further, these incidences prove how important the fire sprinkler installation is on these old buildings in saving precious lives.  NFPA research also shows that sprinklers reduce the rate of civilian fire deaths by 87% and injuries by 27%.

Fire Sprinkler Systems suppress the fire quicker which allows the residents enough time to escape.  It can extinguish the residential fire in less than a minute, says the NFPA.  Automatic fire sprinklers have been used successfully to protect commercial buildings in this country for over a century.  Residential buildings are as important as commercial buildings in saving the precious lives of people.  It only cost 1% approx. of the total building costs.  Further, discounts on insurance will be available to benefit the homeowners.

American Fire Protection Systems is a trusted Fire Sprinkler Contractor in Los Angeles.  We have combined experience of over 100 years and our expert professionals can design, execute, inspect and maintain your new or existing sprinkler systems.  Fire Sprinkler systems are no more a luxury and it is a mandatory life-saving system for every high-rise buildings.  Call us – (888) 570-8828 or Contact us for all types of sprinkler services.  https://www.americanfireinc.com/contact-us.php