TYPES OF FIRE SPRINKLER HEADS AND WHERE IT IS USED? - americanfireinc 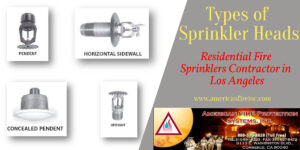 Pendant sprinkler heads hang from the ceiling and are topped with a convex, round, gapped deflector plate. When the fire sprinkler heads are activated, they shoot a spray of water downward into their deflectors, which subsequently scatter the water broadly in a conical pattern around the room. Since the pendants reach from the ceiling, they give the most coverage for the area. There are several pendant varieties, and they may be pretty successful in covering a wide range of structures and locations, from industrial buildings to daycares.

An upright fire sprinkler head operates similarly to a pendant, except that it is vertically inverted. The sprinkler is positioned low (usually on or near the floor), aiming upward. The deflector plate is attached to the top of the sprinkler and has the same effect as a pendant fire sprinkler in that it forces water to spray in a circular pattern around the device. There are a variety of uses for upright fire sprinklers, and they are often used in locations with a more convoluted architecture, where covering the whole area from above may be difficult. They are installed in industrial settings, where overhanging equipment may obstruct pendant fire sprinklers, partly (or sometimes completely) obstructing them and reducing their efficiency. Additionally, buildings without a roof depend on upright sprinklers.

The sidewall sprinkler heads protrude horizontally from the wall parallel to the floor, rather than falling from the ceiling or attaching some upward pipe. Sidewall sprinklers are appropriate for narrow locations, such as corridors, areas with obstacles, or areas without accessible ceiling piping. The sidewall fire sprinkler head has a solid, rectangular or semi-circular deflector plate that assists in dispersing the water away from the ceilings and down and out in a crescent-shaped spray toward the open space it is protecting.

Concealed pendant fire sprinkler heads are comparable to pendant sprinklers in terms of the overall design. However, they vary significantly in that they are specially built to blend into the environment more effectively, eliminating any visual abnormalities. This is often accomplished by incorporating the sprinkler into the ceiling itself, with a plate covering the bottom of the device that mixes in with the architecture of the ceiling and conceals the device. When a certain temperature threshold is achieved, the plate is intended to come out automatically. It is necessary to maintain a balance between functioning and design. Therefore to guarantee effective, uninterrupted functioning of the fire sprinkler, that threshold is often set lower than the sprinkler’s activation temperature. Thus, a delay exists between the plate dropping and the sprinkler activating. The head is best suited for infrastructure that prioritizes appearance and feel, whether residential or commercial buildings.