WHAT IS RESIDENTIAL FIRE SPRINKLER SYSTEM AND WHAT ARE ITS TYPES? - americanfireinc

A Residential Fire Sprinkler System is a form of active fire protection in which a fire is extinguished at its source using high-pressure water. They are not driven by complex high technology but rather by a simple sensing mechanism. After the appropriate heat level is attained, each sprinkler operates independently. As a result, the number of active sprinklers is restricted to those closest to the fire, which increases the available water pressure above the source of the fire. Fire Sprinkler Systems are the most significant advancement in fire defense technology during the last century. Sprinkler systems are the most effective technique of containing flames and preventing their spread to people and property. Sprinkler systems have been shown to be very effective, to the point that they are now mandatory to be installed in residential buildings in many parts of the world, including Los Angeles. According to the National Fire Protection Association, they minimize home fire mortality by 81% and property damage by 58% or more. 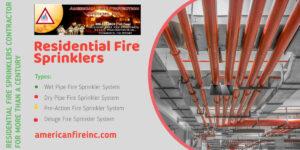 How A Sprinkler Works

Fire Sprinkler systems operate based on high heat triggers located inside the sprinkler system. When a fire starts, the air immediately warms up and rises to the ceiling, and spreads outward. When sufficient heat is applied to the air and reaches a sprinkler head, a chain reaction is triggered. Each head is equipped with a trigger, often a glass tube filled with a temperature-sensitive liquid or a soldered metal link. Once the temperature surrounding the sprinkler head reaches a particular threshold (often 135°F to 170°F), the heat either melts the soldered link or fractures the glass tube. This effectively ‘breaks the seal’ on the pipe plug and allows the water to escape. When the water strikes the little wheel at the end of the sprinkler head, water fanned automatically over the fire’s origin.

Dry pipe systems have been used in areas where the ambient temperature is low enough to freeze the water in a wet pipe system, rendering it unworkable. The sprinkler piping is pressurized with air. To separate the sprinkler pipe from the water supply line, a specific alarm valve is utilized. When one or more of the automated sprinklers is subjected to a temperature equal to or greater than the temperature rating, it opens, enabling the air in the pipe to escape from that sprinkler. As the pipe’s air pressure falls, the pressure differential across the alarm valve changes, and the alarm valve opens, enabling water to enter the piping system. The water flow from the sprinklers is delayed until the air from the sprinklers is evacuated. As a result, dry pipe systems are slower to respond in the early stages of a fire.

Pre-action fire sprinkler systems are based on the dry pipe concept, meaning water is generally not held inside the pipes. The distinction is that water is prevented from entering pipework by an electrically driven valve referred to as a pre-action valve. Independent flame, heat, or smoke sensing controls valve operation. Two distinct events must occur in order for sprinklers to operate. The detecting system must first determine the presence of a growing fire and then open the pre-action valve. This permits water to flow into the system’s plumbing, essentially resulting in the creation of a wet pipe sprinkler system. Second, each sprinkler head must open to allow water to pour onto the flames. In some instances, the pre-action fire sprinkler system may be equipped with a double interlock that involves the addition of pressurised air or nitrogen to the system’s pipes. This feature has two purposes: first, it monitors piping for leaks, and second, it collects water from system piping in the case of an accidental detector activation. This makes these sorts of fire sprinkler systems perfect for the museum, server room, and library applications, as well as data centers or server rooms.

Given the variety of sprinkler types and their distinct characteristics, it is essential to choose the correct system for the facility. Since selecting the appropriate sprinkler type requires experience, hiring professional Fire Sprinkler Contractors for inspection, installation, and maintenance is essential. Additionally, a competent local contractor like American Fire Inc. in Los Angeles will be familiar with any applicable local or state requirements. Certain states require certification of fire sprinkler contractors. In California, for example, the Business and Professions Code and the Contractors State Licensing Board (CSLB) both require that systems be installed only by contractors who have a C-16 (Fire Sprinkler) Contractor’s License. Along with ensuring that an installer possesses all necessary government certifications, it is important to ensure that they are bonded and insured, and you may want to check their references and background for any outstanding judgments or claims, as well as any citations from OSHA or other government authorities.

American Fire Protection Systems With a combined experience of over 100 years, the team provides outstanding fire protection systems as a Los Angeles-based fire sprinkler systems contractor. We are insured and comprise certified professionals who specialize in customized fire sprinkler solutions. For further details, Contact us