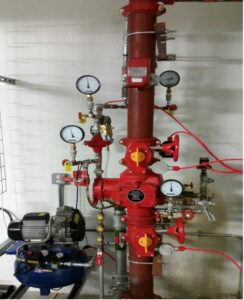 Single Interlock – This device allows a single prior fire detection incident to occur.  This occurs nearly invariably as a result of a heat or smoke detector being used.  When this occurs, the pre-action valve opens, allowing water to reach the piping structure.  If a sprinkler head starts before this, it will alarm a warning but no water will discharge.  Critical areas where it is important to control accidental water discharge due to a damaged Fire sprinkler system or damaged sprinkler piping are the important applications for single interlock systems.  Details are given below;

Double Interlock – Double interlock devices are valuable for protecting extra water-sensitive objects such as museums, exhibits that cannot afford to be misplaced.  Pressurized air or nitrogen is applied to the system piping in a double-interlock pre-action system.  This aids the detection of potential leakage and keeps the water in place if the valve fails to prevent an unintended discharge.  When it comes to accidental discharge, the double interlock mechanism provides an additional layer of security.

Non-interlock – If the supplementary monitoring mechanism is engaged, the main valve opens, releasing water into the sprinkler piping, ready to be released to the heat supply until the heat increases sufficiently to trigger the automatic sprinkler systems.  If the automatic sprinklers alone are triggered in a non-interlock configuration, the key valve will open and discharge water into the safe area without waiting for confirmation from the electrical detection unit.

The benefits of pre-action sprinkler system

American Fire Protection Systems, Inc is No.1 choice in Los Angeles for any type of fire safety solution like fire sprinkler installation, inspection, repair, and maintenance for a decade.  Our expertise lies in identifying the best options for the fire suppression system requirements.  For your emergency fire safety needs contact us any time.  Visit us for more details about our services: https://www.americanfireinc.com/