Protection may be expensive, but so can failure to protect it. High Rising buildings have become a new normal in the modern cities especially in the developed countries  and soon will become a normal in developing countries. This is because High rise  buildings are built out of necessity as one of a wide range of tools to achieve high density development. They provide the opportunity to control urban sprawl with their relatively small foot print. However, high rise means high risk requiring high fire protection system. High-rise buildings present several unique challenges such as, longer egress times and distance, evacuation strategies, fire department accessibility, smoke movement and fire control. 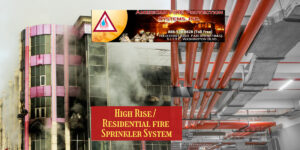 In November of 2019, a high-rise fire in Minneapolis killed five people and wounded many more. In recent years, the Marco Polo fire in Honolulu, the Trump Tower fire in New York City, and the most recent event on Los Angeles’ Westside have all taken lives. Aside from being high-rise buildings, all of these occurrences had something else in common. There were no Residential Fire Sprinklers in any of these buildings. According to the National Fire Protection Association (NFPA), roughly 40 people die and over 500 are wounded each year in high-rise fires. Residential Fire sprinklers may modify this, and they are mandated by national building and fire codes. Fire sprinklers are the most obvious Active fire protection system.

Following a devastating fire in 1974, California implemented laws requiring fire sprinklers to be installed in all new buildings, leaving the old buildings erected before to 1974 vulnerable. However, after the 1988 fire at the First Interstate Tower in downtown Los Angeles, which killed one and wounded 40 others. Officials in Los Angeles immediately pushed for fire sprinklers to be installed in all high-rise commercial and residential buildings. However, supporters chose to split the idea into two parts: one for companies and one for residents. The retrofitting of 350 business buildings was authorized by lawmakers, but residential building owners were more vocal in their opposition. They said that the expenses of retrofitting were too expensive. As a consequence, residential fire sprinklers were not mandatory in high-rise structures erected between 1943 and 1974. This gap is still prominent in Los Angeles; the fire at a 25-story residential high-rise in 2020 that left eight people wounded did not have sprinklers since the building was erected over 60 years ago and was not obliged to have a fire sprinkler system.

The California Building Standards Commission adopted the State Fire Marshal’s adoption packages for the 2010 California Building Standards Codes’ Building, Fire, and Residential Codes. A critical component of the code’s implementation, which began on January 1, 2011, is the “sprinklerization” of all new one- and two-family residences and town house construction across the state. Prior to adoption, California had over 150 jurisdictions with local residential fire sprinkler ordinances.

The National Fire Sprinklers Association (NFSA) is urging all lawmakers to go even farther and require fire sprinklers in all high-rise buildings throughout the nation. The NFSA is also advocating for the passage of HR 4685, the High-Rise Fire Sprinkler Incentive Act, which would grant tax breaks to building owners who retrofit high-rise structures with fire sprinklers.

Advantages of Sprinklers – Sustainable Investment for a long term

Sprinklers save lives and may save catastrophic property damage and associated expenditures. Nonetheless, retrofitting the older buildings with sprinklers and installing sprinklers in new buildings is seen as an excessively costly and hard endeavor. However, given the risks associated with a non-sprinkler-equipped building, such as loss of life, higher insurance premiums, business disruption, and possible litigation after a fire, neglecting to retrofit a building might end up costing a lot of money in the long run. Investment for residential fire sprinkler systems, is necessary for sustainable High-Rise buildings. With good planning and communication by all of the stakeholders, the process can go smoothly and make business sense.

American Fire Protection Systems is serving clients over 100 years as Residential Fire Sprinkler Contractors in Los Angeles, California. Our experts comply with national and local codes at every phase of developing, designing, installation and maintaining the fire safety systems for all types of Residential, Industrial and Commercial Buildings.